In her 2004 photo series Swanrider, Forouhar pushes the ironic play on difference to its limits:  a woman, dressed in a black chador, is riding along a river on a huge white swan. The contrast between black and white dominates the scene. This black-and-white imagery refers to the way fairytales are structured by such opposites as good and evil. There are also echoes of Hans Christian Andersen’s tale of the ugly duckling that becomes a beautiful swan. It is the tale of the outsider who becomes the radiant focus of attention. Such references to miraculous transformations are an ironic take on the role of the woman in the dark chador.
Apart from the fairytale aspect, the images also conjure associations of other metamorphoses in western culture: in Richard Wagner’s opera, Lohengrin, the knight in shining armour, epitome of the German ur-myth, is carried on a boat drawn by a swan that later turns out to be Gottfried. For her own performance, Forouhar has aptly chosen the town of Bad Ems on the river Lahn in Germany. In her photos, however, the swan is not a prop from a staging of Lohengrin, but an ordinary pedal-boat. Forouhar appropriates this ur-German myth and quite literally alienates it by confronting it with the veiled woman who is marked out as foreign and ‚other’.
At the same time, the pedal-boat foils the reference to the myth of Leda and the swan, in which the god Zeus seduces the beautiful virgin Leda in the guise of a swan. Here, however, in an inversion of such fertility myths, it is not Zeus who covers the woman, but the chador that spreads out ornamentally over the swan. Forouhar’s work, with its manifold references to German culture and to Greek mythology as the so-called cradle of western civilsation, adopts a wealth of significations by which western society constructs and defines its identity.
Another reference in this work is the title’s reflection of the road movie Easy Rider (USA 1969) in which two bikers set off in search of the real America but „couldn’t find it anywhere“. The country they travel is by no means the land of opportunity and the free. The film also uses visual markings to address discrimination and otherness. Such references undermine the fairytale idyll of the swan gliding along the calm waters of the Lahn. Alexandra Karentzos 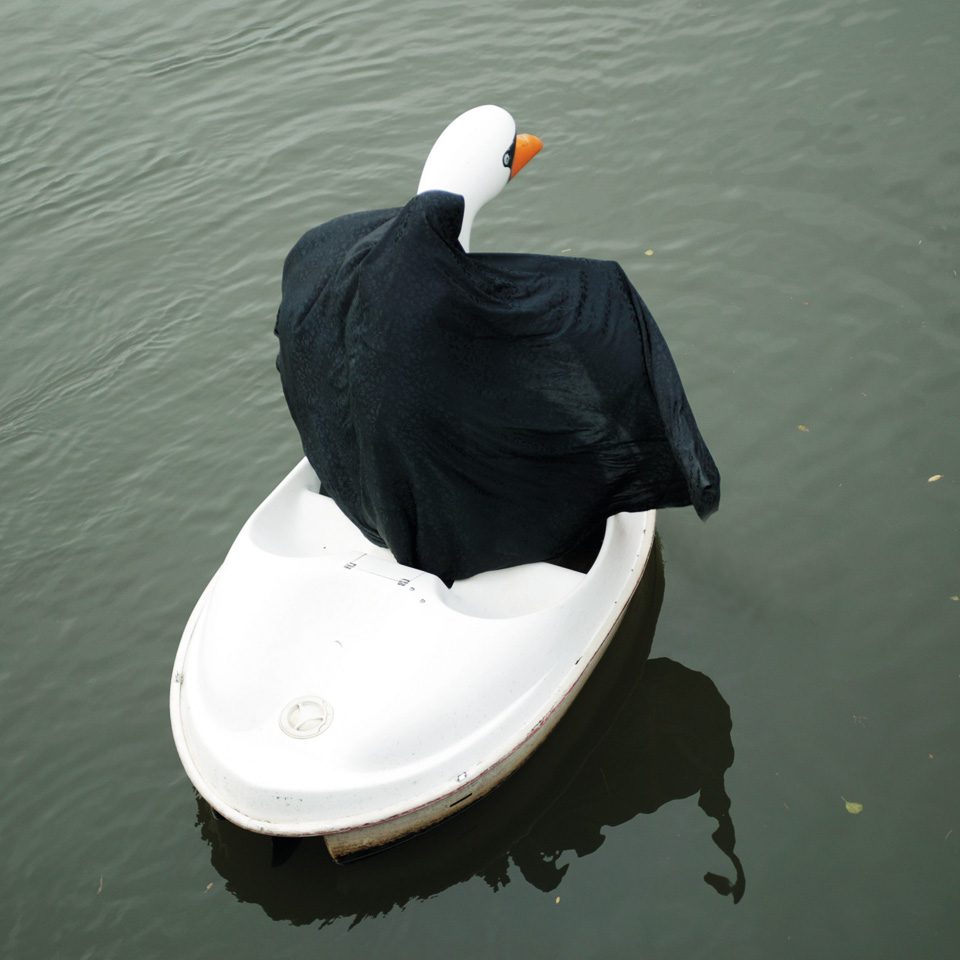 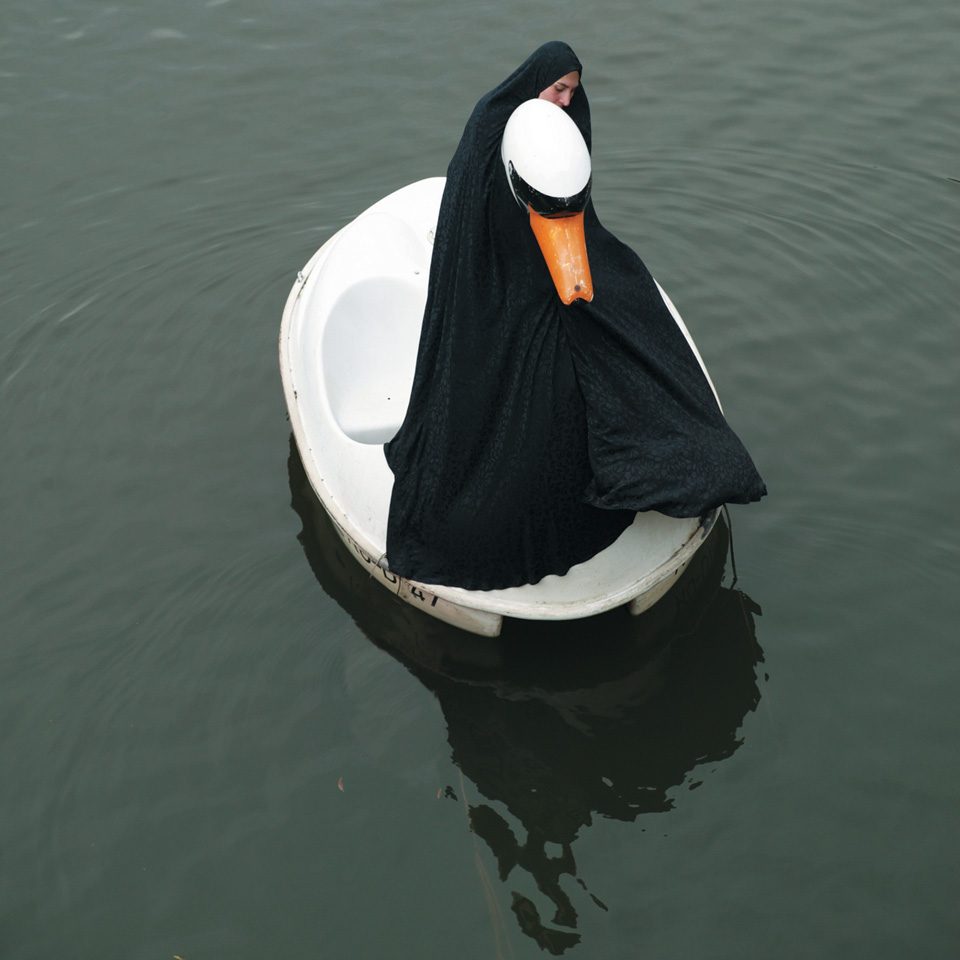 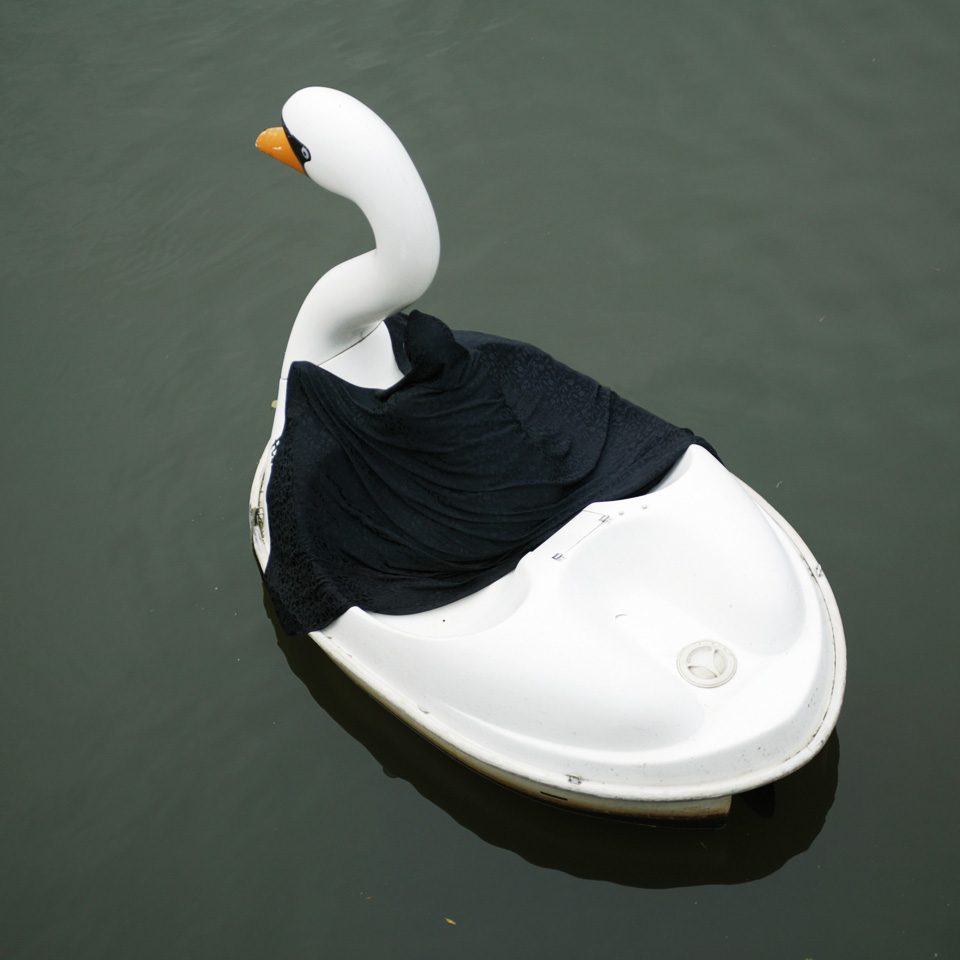 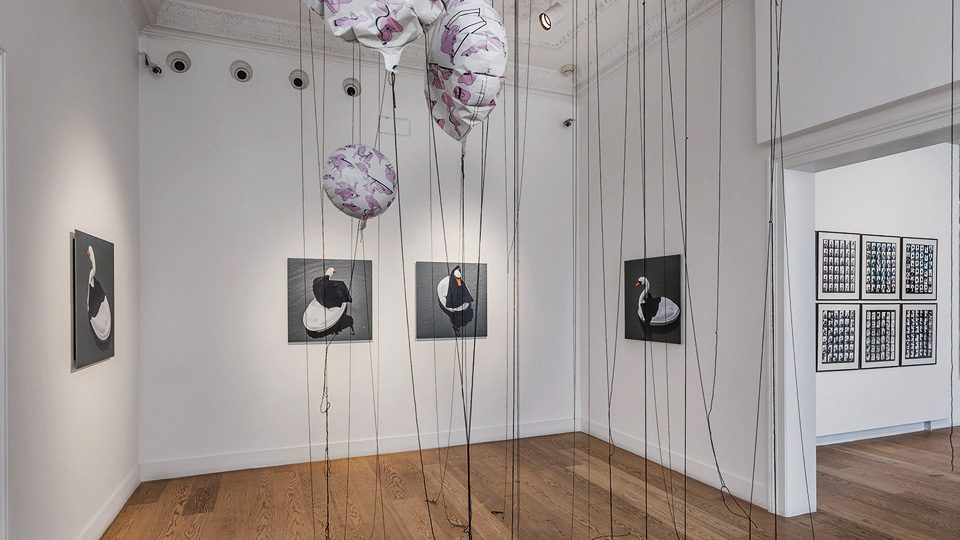 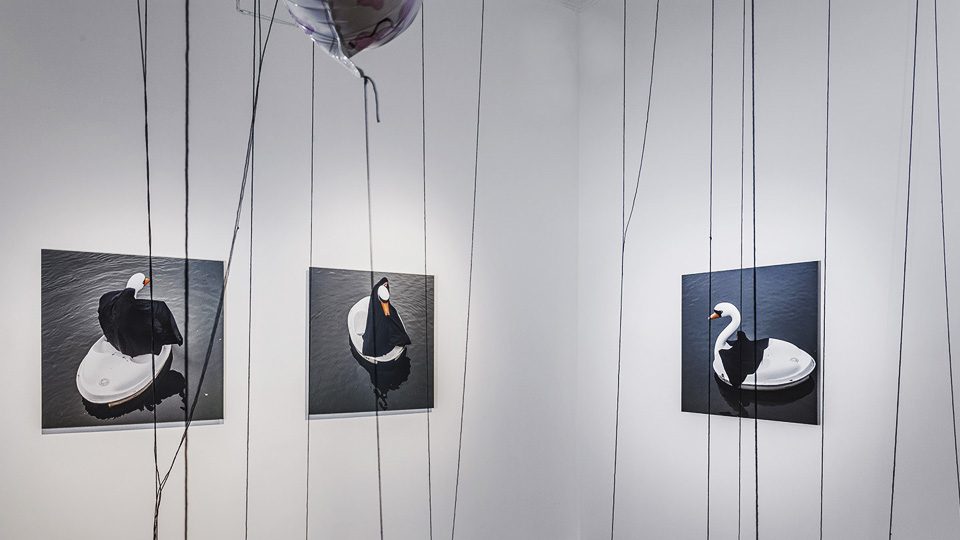 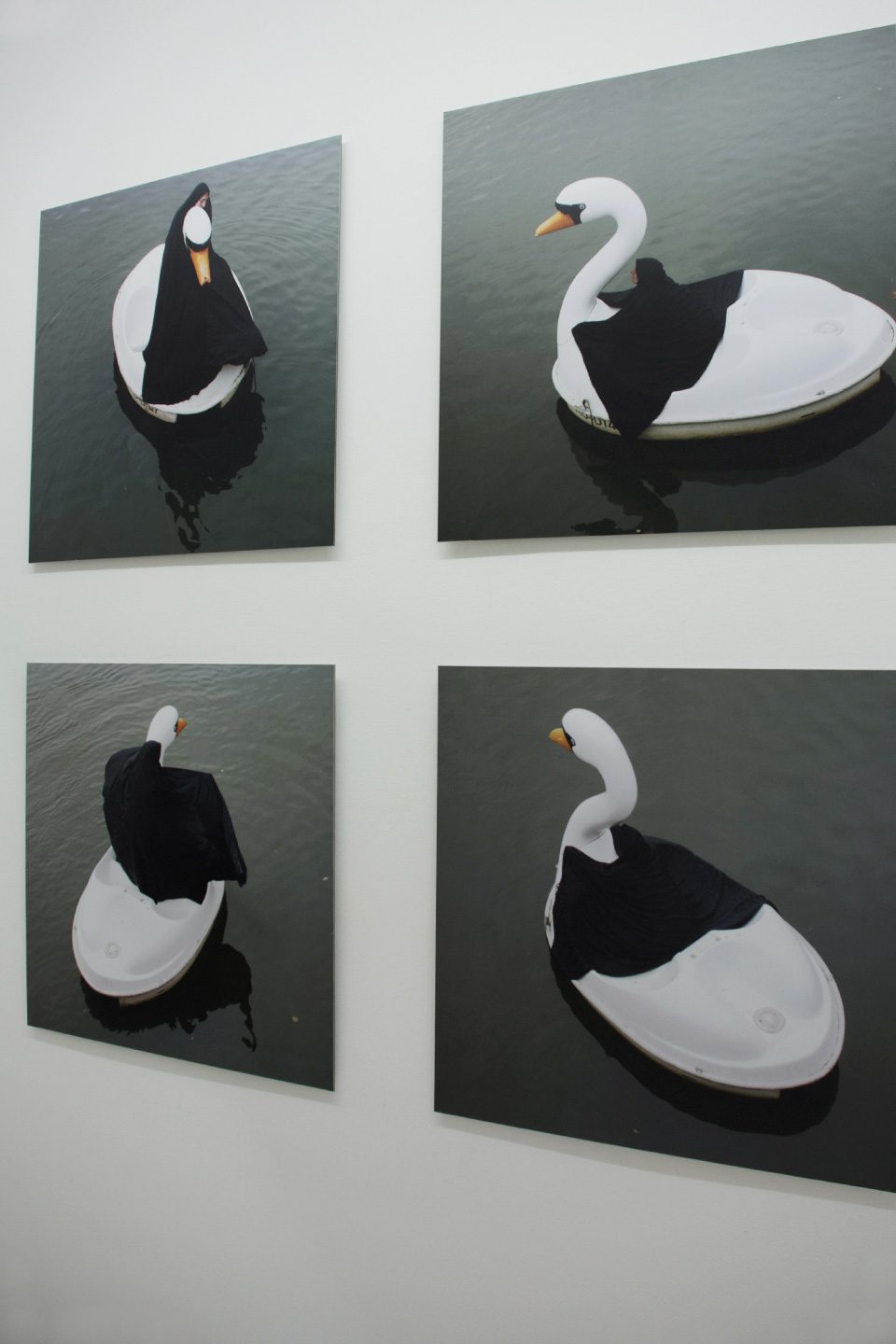 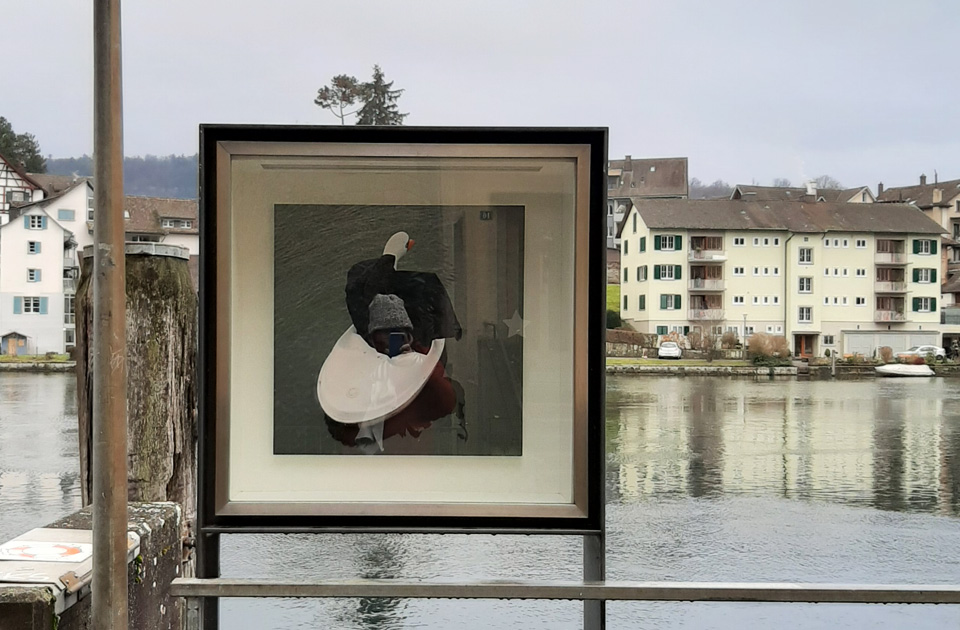